New HEB at Oltorf and Congress 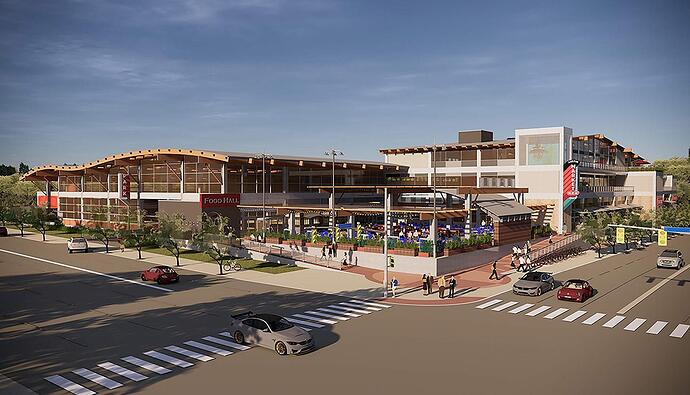 H-E-B is tearing down one of Austin's busiest stores, but it will come back...

Austin’s oldest H-E-B isn’t going anywhere after all. After months of working with city of Austin traffic engineers, H-E-B has decided not

After months of working with city of Austin traffic engineers, H-E-B has decided not to build a new store in the Twin Oaks shopping center, the company announced Tuesday.

Instead, H-E-B will demolish the existing store on the southwest corner of Oltorf Street and South Congress Avenue and build a multi-story building with underground parking on the current site, said Leslie Sweet, H-E-B’s Central Texas director of public affairs. New planned features include a beer garden, a food hall and a stage for live music, which will replace the surface parking lot.

“We want this to be a powerhouse food store with every fresh department and a holding capacity that we need and don’t have right now,” Sweet said. To keep up with one of the smaller but highest-trafficked stores in the city, staffers have to restock shelves four or five times a day — and even more often during South by Southwest and the Austin City Limits Music Festival.

Hopefully when they’re all done, the experience is better than parking at Whole Foods… I wish Austin would stop building mega shops at critical intersections.

Hey on a rainy day that whole foods underground parking is great!

Where will all those people shop once the HEB is gone?

I am really excited about this store. I am a fan of HEB as a business but after seeing some examples of great urban design in stores in Houston and San Antonio I am glad that Austin is finally getting some attention as well. Nothing is uglier than having acres of surface parking dotted by scraggly trees overladen with grackles. Excited to see what the Twin Oaks Shopping Center on the NE corner of the intersection will become when HEB sells it. I had heard that HEB bought it to block out Whole Foods but if access is such an issue there then a high traffic use like a grocery wouldn’t work anyways. More residential mixed use?

The article mentions converting the CVS to a temporary store for the 2 years of construction and its not close/ there are closer options but there is a new HEB opening up at Slaughter.

I am really excited about this store. I am a fan of HEB as a business but after seeing some examples of great urban design in stores in Houston and San Antonio I am glad that Austin is finally getting some attention as well.

I fully concur on this one. H-E-B is being laudably forward-thinking – even more so than Whole Foods, believe it or not – in designing a new store for the area that’s so broadly pedestrian- and bike-friendly. Even its Mueller store – ostensibly adjacent to an urbanist-friendly neighborhood, and only a few years old – consists primarily of surface parking, which as impervious cover is generally terrible for the environment. If anything this may be the single most important store in the entire Austin area for the company to “get right,” considering it’s almost literally the only full-size grocery store anywhere in the '04 ZIP code. (I know there’s technically a Walmart-housed grocery store at its literal edge, on the corner of Ben White and 35, along with a Randalls and Central Market just south of it, but still: 78704 circa 2019 has over 42,000 residents! That number is also certain to rise once the city’s land-development code is rewritten to allow for denser development.)

When I first moved to the 'hood over 20 years ago, I remember the “old” H-E-B that was still part of its original L-shaped strip mall first built in 1957 that included a few shops along its western flank. While the company thankfully bought the whole parcel, tore down the older buildings, and expanded both the store’s physical footprint as well as its parking lot size, it was crowded enough even by the time I moved to Bouldin in late '06 that I made a point of never shopping there unless otherwise unavoidable. (Until a couple of years ago it was one of the only 24-hour stores anywhere nearby, though they started closing at midnight after a customer was brutally attacked late at night in the parking lot.)

Excited to see what the Twin Oaks Shopping Center on the NE corner of the intersection will become when HEB sells it.

Agreed here as well. The two aging strip malls on the NE and SE corners of the S. Congress / Oltorf intersection are both ripe for repurposing as far denser, mixed-use development, and if they incorporated a residential component into each (which I suspect is all but a given, considering what the underlying land is worth today), both would allow for very easy access directly into downtown via either bike or bus. The 10 acres H-E-B owns on the NE corner may quite literally be the most prime redevelopment parcel in the entire city, given both its size and location.

In this particular case I really don’t think H-E-B had any other options. There simply aren’t any other parcels of land of similar size anywhere else in '04 that could be repurposed as a store both large enough to meet the area’s needs, and sufficient to incorporate the (unfortunately) necessary number of parking spots – and note that they’re planning on digging down deeply enough to incorporate two full sublevels of it. (I also think it’s stating the obvious that there’s no realistic way to permanently eliminate the last centrally located grocery store standing in such a heavily populated area.)

Moreover, as the Statesman article notes, the whole reason H-E-B ended up not using the original Twin Oaks site catty-corner to it is because ingress/egress would’ve been so problematic for anyone heading into it from north of Oltorf – meaning a large majority of the area’s residents, factoring in the ones from Zilker and Bouldin entering mostly via Oltorf, along with Travis Heights folks coming down via S. Congress. All of them would’ve had to make left turns into the Twin Oaks site – either from southbound S. Congress, which was always a nightmare considering how much traffic it gets, or via left turn from Oltorf onto northbound S. Congress, which is often backed up even without a megastore on the corner – and I can easily see why that would’ve been hugely problematic.

Also, I think the downtown Whole Foods has handled its largely similar ingress/egress issues remarkably well, particularly considering its location at one of the most heavily trafficked intersections in the entire city (spanning an entire downtown block, no less!). If anything I’m hoping the new store will end up improving the current situation, which routinely involves backups along both S. Congress and Oltorf anytime the parking lot is full or nearly so. Channeling vehicle traffic directly into the parking garage, like Whole Foods does, will largely eliminate that problem, albeit at the cost of adding substantially more parking capacity on whole.

Where will all those people shop once the HEB is gone?

This is admittedly the massive downside to bulldozing the existing store and rebuilding a new one on the same site. The current store is far too small as it is today, and the planned temporary location in the old Eckerd/CVS drugstore at Twin Oaks is almost two-thirds smaller! (Also, all the aforementioned left-turn issues will be unavoidable for it.) At least for car-owning residents in the area, I suspect they’ll end up having to do much of their grocery shopping elsewhere, e.g. the Walmart, Target and Randalls on both sides of Ben White, as well as the Central Market just south of it. The new-ish Wheatsville across from Brodie Oaks is an option as well, as is online grocery delivery.

That said, none of the above options is a one-size-fits-all solution: Walmart & Target have abysmal produce; Central Market (like Whole Foods) doesn’t sell many staples such as “normal” laundry detergent or even most varieties of soda (aside from “gourmet” options like Mexican Coke); and Randalls remains as ridiculously expensive as ever, the core reason why it’s down to only a handful of remaining stores (I’m frankly amazed the one on Ben White is still there). Even in Houston, its home market – and where it broadly dominated the grocery scene less than 20 years ago – H-E-B’s entrance has effectively forced most of them out of business, along with many of its Kroger stores.

Still, it’s not without irony that I’d point out much of the '04 ZIP code will qualify as a food desert until the new store is complete, given the repeated (and, at the time, false) assertions of a since-booted listserv poster who insisted this was the case. (I’m taking it as a given that the temporary store will have a produce department a fraction of the current store’s size, which is one of the core elements of defining food deserts in general.)

Jeff, out of all your local options you fail to mention Sprouts. Between Sprouts, Wheatesville and Central Market, our family finds plenty of fresh produce.

Agreed that there’s good fresh produce at Sprouts, Wheatsville, and Central Market – but none of them have the range of “mainstream” grocery and household products like an HEB does.

I love & patronize all the shopping options in our neighborhood (and we haven’t even mentioned Thoms or Trader Joes yet) – but my sense is many of us still do want a nearby supermarket that stocks a wide range of mainstream brands and products.

my sense is many of us still do want a nearby supermarket that stocks a wide range of mainstream brands and products.

Yeah I’m looking forward to the new HEB. And also agree about a mini market. I had high hopes for the one in Lamar Union, but it never panned out. I know it’s the hardest to keep fresh, but sometimes I just need a tomato or a head of lettuce

Yeah the Lamar Union mini-market was weird. I liked its cafe hang-out space though. They obviously didn’t figure out how to make it financially viable. Thom’s & Bluebonnet shop clearly have winning recipes for making a small market work financially, so it’s possible.

By winning recipes - at least in the case of Bluebonnet - I’d guess a much more favorable rent situation. I feel like the Market at Lamar Union could have thrived during Covid with to go draft beers