Just sharing here in case anyone hasn’t seen in on other neighborhood forums.

“Hello neighbors. As was reported on here earlier tonight, my husband and I, along with our neighbor were robbed at gunpoint while walking home from dinner at Lamar Union. The incident occurred on Kinney Avenue directly across from Kerr Avenue. Three black males came walking from Kerr Avenue, across the street and came up behind us. They demanded our wallets and cell phones. One individual had a handgun. Before we could react, a second individual punched my husband in the face and tackled him to the ground… I was pushed to the ground. I threw my purse at the gunman, my husband managed to get his wallet out of his pocket, they took it and ran down Kerr toward a white, small SUV. They took off on Kerr and took a left on Garner. Please be careful and watch out for these guys. We went to the police station and gave statements, they also collected forensic info from us. The detectives were shocked that this happened in our neighborhood, as are we… If anyone sees our stuff (small purple leather cross body purse or a brown mens wallet), please call Kevin [phone number redacted].”

This is obviously disturbing, but I feel like I should stress how unusual street muggings are these days. Even in NYC they’re at an all-time low, but in Austin? And on a quiet residential neighborhood street? This happens approximately never, Few people carry any significant amount of cash on their person nowadays, plus aggravated robbery (a.k.a. with a deadly weapon) can result in a multi-decade sentence even for a first offense.

I feel like we might be missing a piece of the puzzle here, though that’s admittedly speculative plus I have no idea what piece it could be.

Can we be certain this is not “fake news” meant to further divide the community? No disrespect meant to the individuals in the event this is indeed a true story I’m just looking to confirm it before letting it influence us.

To the extent that the investigating police officer has provided his phone number and requested any surveillance footage that might be available from privately owned cameras, we are certain.

That thought crossed my mind, but OTOH what purpose would such a story (if fake) serve? It doesn’t have anything to do with our most recent topics of controversy, and crime is basically a non-issue in our current mayoral and council campaigns.

Also, I saw the original post on Nextdoor that was written by one of the claimed victims, and it seemed legit (though I didn’t recognize the name). If anything, I was wondering if this particular couple had been singled out for some reason. (It’s not exactly typical for groups of armed POCs to stake out Lamar Union waiting for Zilker residents to walk home.)

Check with the police if you’re concerned that it’s fake news (I’m sure they could confirm whether or not it was reported)… but don’t post that speculation here. Assuming the story is true, there are real victims, and questioning their story is an awful thing to do.

I don’t know @funkdified - I think it is a valid question. I looked at the crime blotter websites I could find online and don’t see any mention. The closest I found was an assault on South Lamar resulting in injury: 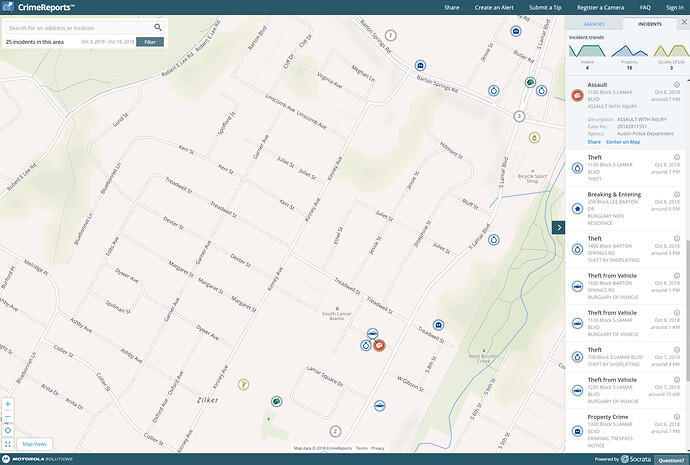 I’m not saying this is proof nothing happened - these sites could just be slow to update. But, I think it is reasonable to question.

I verified this with APD yesterday as REAL!!!
Thought that was on the first message of this string

This horrible event didn’t happen to me but I got in contact with the Detective Guerra, who is investigating it, to see if there was any additional information that could be shared with the neighborhood. His report indicates the perpetrators had gotten out of a silver SUV and had started following a group of three people who were walking down Kinney. After the robbery, the men got back into the SUV, made a left onto Kerr, and then continued down Garner. He asks if anyone might have some information or home surveillance video to please contact him at 512-974-4475. Check video timestamps around 8-8:30pm to look for a silver SUV.

Thanks @robert.wyatt and good to know @Cparker, sorry for being a skeptic! You may have put that in your email to me and I just read past it. You were like the tenth person that sent it to me!

Surely there are enough Ring / Nest doorbells in the neighborhood that someone caught something! I’m surprised the police aren’t going door to door to spread this on Kinney, Kerr, Garner.

It surprises me that this has not been on the news with a description of the 3 at large villains.
Pretty scary if they are lurking about the hood, due to no consequences.