Proposal to change zoning on Planet K on Lamar

Hi all - For some reason we didn’t get the notification on this property. However, the ZNA has already weighed in (please see attached) 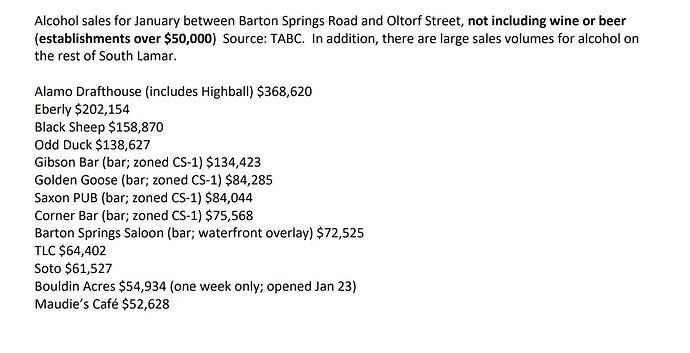 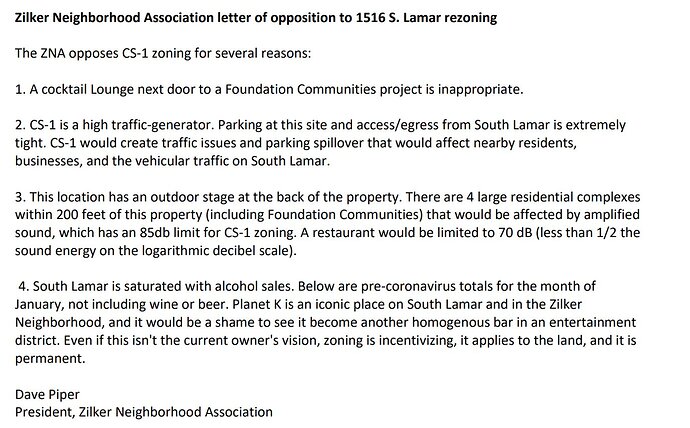 I really strongly recommend we consider putting this to a vote so FoZ can weigh in. The ideas proposed by the ZNA here are just absurd. Planet K is fine, but is it an iconic part of the South Lamar landscape? The reason we shouldn’t have more bars/restaurants is because bars and restaurants are very popular and do good business?

Wow. That’s a pretty unbelievable position I wonder if this has been brought up or discussed anywhere outside the executive committee. I can put together a vote.

Jimmy, what exactly is being proposed for the site? (not that I’d have a problem with whatever’s going in there, and I live all of three blocks away) Just FYI, “cocktail lounges” are more or less extinct in terms of being permitted by the city, unless they have grandfathered zoning. I’m admittedly not sure how Corner Bar & Gibson Bar got around it, but nowadays getting a license for a “pure” liquor-selling establishment is extremely difficult for a variety of reasons – which is presumably the reason the ZNA had to cite venues that are primarily restaurants as “comps,” despite being facially ridiculous: Soto is a high-end sushi place that’s even pricier than Uchi! (It’s typically requisite that newly built establishments generate at least 51% of their total revenue from non-alcohol sales.)

Amusing that the ZNA is claiming a head shop with a side business in sex toys is “iconic” (without mentioning the considerably more iconic Saxon Pub a few doors down, presumably 'cause it sells the Demon Juice that mightily offends the ZNA’s prohibitionist wing).

Also note the freighted subtext of a “cocktail lounge” being “inappropriate” next to a subsidized-housing facility that happens to be home mostly to lower-income POC. I’m sure it’s all completely unrelated the ZNA listserv’s moderator / hall monitor censoring anyone criticizing Ann Kitchen for her refusal to support defunding the police. Always gotta focus on the family!

Actually I believe cocktail lounge is a designated use that indicates an establishment that can serve hard liquor and not be required to serve food as well. It is still very much in use. Corner bar, lava a street bar on south Lamar, as examples are all cocktail lounges.

JP, I think you’re mistaken on this one. As I mentioned, Corner Bar & Gibson Bar are the only two booze-only places in the Zilker vicinity that weren’t grandfathered in some capacity. (IIRC even Barton Springs Saloon only managed to get a variance by putting its former status as a quickie mart into play in some fashion.)

Lavaca Street Bar may have switched to liquor-only sales since reopening, but it was originally called “Lavaca Street Bar & Grill” (both at its original location and elsewhere). “Cocktail lounge” is a permitted use per zoning regs, but in practice it’s rarely used for new applications – old-school venues excepted (e.g. G&S Lounge in South Austin, and places like LaLa’s, Carousel Lounge and Donn’s Depot elsewhere in town).

Btw I had to do a fair amount of research on this topic about a decade ago when I was considering adding a bar extension to a gallery I owned at the time over on 2nd St. It has a more literal ban on bar-only venues: they’re prohibited in the 99-year ground lease covering the 2nd St. District (the W isn’t formally inside of it, as an aside), even places serving only beer & wine. This was one of the reasons I decided not to proceed with the addition, and as we’ve seen in Zilker at Aviary, NIMBY types really fight even the tamest of “novel” ideas for establishments that sell alcohol – as if it’s 1920 and the Volstead Act was just enacted, not 2020.

There are multiple designations from multiple government agencies. The cities designation of a ‘cocktail lounge’ is seen below. They are automatically allowed in the central business district. Your gallery is ok with the city as a use but probably not ok with the state or TABC or land owner.

Again, I know it’s an allowable use under CS-1 zoning, but in practice it’s just not really done. Feel free to check for yourself! Aside from very limited exceptions, we’ve had very few all-new drinking-only establishments open up over the past 20+ years outside of specific districts. Even the “new” bars in East Austin were nearly all formerly Tejano dance clubs and the like before the area began getting gentrified (and thus already had both the zoning and TABC permits in place). Rainey St. is one of the few areas that’s had more than 1-2 booze-only bars open.

Hell, even places that are better known as “pubs” mostly serve food as well. The Ginger Man is a Warehouse District bar you might’ve seen at some point, though it’s moved away from its original location on Fourth St.: they had, and still have, limited food service. Or, say, the Crown & Anchor: not sure if you went to UT or are familiar with the vicinity, but it’s located just north of campus. They have some excellent burgers & fries!

Btw the ZNA and other traditional NAs are basically the reason why this is the case: as we’ve just seen, they throw irrational hissy fits whenever anyone dares to propose anything “new” in the area (especially if it includes booze service). Same story pretty much everywhere in town. They don’t even like restaurants that serve booze! (as we can see from Jimmy’s list)

I assume we agree this type of zoning obstruction is all patently ridiculous and rooted in little more than fear-mongering, but fear has been NAs’ (and NIMBYs’) stock in trade for 70+ years now – including much more pernicious manners than liquor zoning regs, e.g. Zilker itself now having a predominantly white population (and disproportionately skewed towards Boomer-age folks, at least in the ZNA and its ilk). That’s a whole other subject though…

The other really disingenuous thing here is the “outdoor stage”. It’s not now, nor as it ever been (to my knowledge) used as a stage. It might look like that, but can anyone tell me the last time they went to a concert at Planet K?

Nope, and I first moved to South Austin nearly 25 years ago (albeit with a few years out of town in-between, but still). I’m not even sure the S. Lamar Planet K is the original one; I thought their first shop was near Guadalupe & 29th, though I could be mistaken.

Thank you for saying that. Was going to be my exact point.

I know there arent warm fuzzies about Nextdoor here, but if we want to have a vote on it, I can publicize it on there and drive some traffic over here. People arent gonna find us organically.

Also, their letter is dumb. The paternalistic “let me save these poor foundation communities from the devil, cause I know best” is infuriating.
They oppose apartments cause traffic. They oppose bars cause traffic. The oppose buses cause poor people (Yet oppose bars because poor people with disabilities.). But they never seem to oppose cars because of traffic. Its some broken convenient logic,

They worry about the volume as if it cannot be measured and dealt with at the time of noise making. Do these people not know about volume knobs?

And finally the real reason. They don’t want another bar on Lamar that brings in more of the wrong type of people. All those young people with their stupid opinions that are counter to the ZNA’s long standing wisdom and guidance.

I’m all for directing traffic from other platforms

remember only foz members can vote on foz positions. But everyone can see the votes. Does someone want to type up a proposed position to vote on? Should go in the proposed foz positions category.

Im not sure when the position needs to be ready by in order to be voted on and submitted to the city in time, but maybe an informal poll/open discussion would be more inviting to random outsiders and then we can build the position off of that and put it to an official vote.

I’m all for low barriers to entry.

Regarding a position, some initial thoughs.

Ok - I proposed the position based on this input - after some time for input I’ll put up the vote in the same topic thread.

Is there a link to the application requesting the rezoning. Just feel like it would be good for context.

Here are the applications:

Jimmy (and JP), I think there may have been a misunderstanding here – both on the ZNA’s part and yours. The rezoning application is for “CS-1 - Liquor Sales.” The full list of what’s allowable – including conditional uses – under Austin’s various zoning categories is below. As JP noted, “cocktail lounges” are on it, but they’re a separate category than “Liquor Sales.” Ditto “Restaurant (General)” and “Restaurant (Limited).”

Unless I’m somehow missing something obvious here, it sounds like they may simply be trying to open up a liquor store of some type. Am I missing something, or has the ZNA been making much ado about nothing? I went over all the permitting files on the city’s website, and I can’t find anything else that’s specific to what they’re planning there. (Btw we already have two new-ish “boutique” liquor stores along S. Lamar, including the one at its intersection with Bluebonnet on the SW corner.)

@jeffkirk I’m posting additional information on the official position proposal. But from the cities documents:

The Applicant is requesting commercial – liquor sales (CS-1) district zoning in order to provide
onsite alcoholic beverages within their existing building and covered patio space. This would be
considered a cocktail lounge use and will require a conditional use permit (CUP) prior to
establishing the use.