Just wanted to start a thread re: Paradisa Homes. The recent teardown at 1908 Kinney makes them seem like they aren’t great stewards in the betterment of the neighborhood. A big part of the problem is the contention between developers and the neighborhood, but these types of builds certainly don’t help. From what I understand this build has:

It’s unfortunate on both sides, if the neighborhood could work with developers a bit more constructively, it may be easier to call out ones that truly aren’t interested in bettering the neighborhood. 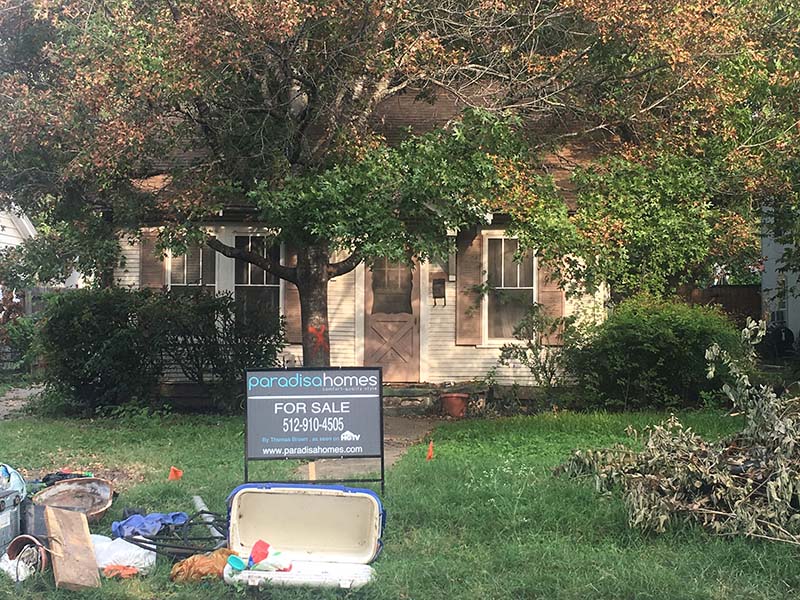 I don’t know the particulars of this lot or builder, but we got a notice that the demolition permit at 808 Garner is scheduled to be heard at the Historic Landmark Commission on March 26. This is a ridiculous waste of our taxpayer dollars! The house is falling apart and should have been torn down years ago but they were waiting for the elderly lady living there to die. I assume that some NIMBY is behind this and Peach and I are willing to go to the meeting.

The Paradisa Homes guys are pretty notorious for not dealing with NAs. Allandale and Brentwood had tons of problems with them. I agree though… fostering a better relationship with developers in general would certainly help and not hurt these situations.

I don’t know the particulars of the Garner case but there is a chance it is innocuous. I believe that by default any demo permit on a house over a certain age goes to the historic landmark commission. Many of these have no historic value or are not in decent condition and proceed through the process unabated, this is just a hoop to jump through for those builders. Ideally there would be some diversion process so HLC could focus on real cases but…Austin!

There are probably some historic rodents occupying it now. Let’s be more sensitive to others.

The Zilker Neighborhood Association has worked with many developer over the years that have resulted in better projects for our neighborhood. Some of the benefits have been $$ for affordable housing, more compatible building designs and the saving of trees. Unfortunately no developer has any obligation to even notify a neighborhood association if what they propose is within the code. So many do not even contact ZNA and just go forward and we see the results far too late in the game. So the door is always open but the developer has to initiate the opportunity, some do ( the good business and corporate citizens) but some don’t(usually the bad actors!) We have suggested for years that the staff advise the developer to engage neighborhood associations from day one, but there is no formal mechanism to get developers to open up a conversation with the association. So if the dialogue doesn’t happen it is because of who? So how do you suggest that all developers be required to engage the adjacent residents and neighborhood associations before it is too late to have a constructive interaction? ZNA is not hard to find after all!

Right, well I was less blaming the ZNA (or others) as I was blaming the mechanisms in place. The nature of a rigid code combined with a rigid approach by people who are against any and all development, results in developers coming in with an aggressive stance off the bat.

Speaking personally, of course, I don’t have an exact answer. But I do look around the world and see so many innovative buildings utilizing a variety of lot shapes / sizes and I feel sad that Austin, being such a creative city, is so boxed into traditional thinking when it comes to land development.

The tangential point is that you’re always going to have bad actors. But when anyone doing any type of development that might push the boundaries of the allowable code is painted in such a way, it makes it difficult to call out the truly bad actors.

Overall I think it would be interesting if the Board of Adjustments could consider a “betterment” standard as opposed to just a “hardship” standard when considering exceptions to the code.

I went ahead and pulled 808 Garner’s demo permit. Rob is correct: any structure more than 50 years old “can” be pulled for automatic review by the HLC – which is both ridiculous and most likely a violation of Texas property law, but still. One of the reasons the commission’s bylaws in this regard are likely illegal is because of its extreme level of vagueness: in effect it assumes by default that any property built before 1968 “might” have historic value, but it fails to state any guidelines (even the most rudimentary ones) for determining bona fide “historic architecture.” Further, I’ve never gotten a clear answer as to which criteria can automatically trigger a review, but I think Rob’s correct that in this case it was likely innocuous (not spurred by any specific individual or group).

You can read the permit here, but be forewarned that it may piss you off in terms of waste-of-tax-dollars matters:

Yes, it seems someone at the HLC did a frighteningly extensive investigation into the home’s entire chain of title dating back to 1934 – and btw I’ll hazard a guess the house’s age is what likely triggered the review. While it provides some mildly interesting history, I shudder to think how many man hours were expended researching the backgrounds of every known occupant of the house over an 80-year period.

In any event, it doesn’t sound like the HLC thinks the house has any historical significance (or at least that’s my reading of the report), nor has anyone outside the commission made any claims to that effect, so I assume the 3/26 hearing is essentially a formality.

Unfortunately no developer has any obligation to even notify a neighborhood association if what they propose is within the code.

Thank God for that! The last thing we need is NAs acting as architectural police to an even greater degree than they do already – and yes, I say that knowing full well that the ZNA thinks it should have a level of discretionary power on par with the likes of master-planned subdivisions like Lakeway. I’m somewhat surprised certain persons haven’t considered a move there; among scores of other things, its Architectural Control Board has literally made it illegal to park along a public street throughout 99% of the area.

We have suggested for years that the staff advise the developer to engage neighborhood associations from day one, but there is no formal mechanism to get developers to open up a conversation with the association. So if the dialogue doesn’t happen it is because of who?

Hmmm … could it possibly be because of NAs that reject change in any form by default? Or because it’s well-known among those familiar with Zilker that the ZNA categorically refuses to endorse any new-build project, regardless of its merits, but will automatically oppose a proposal if it requires even the most minimal of variances? Since I never tire of reading it, here’s a copy of the single bitchiest variance-denial letter I can ever recall seeing.

Shut the front door – I just found a follow-up letter re: 1516 Kinney! It provides further evidence of why developers may not want to deal with a group as brazenly vindictive as the ZNA.

What a waste of time and money! We are sending in our letters in favor of the demolition anyhow.

It appears someone knocked down the historic landmark commission notice posted at 1900 Kinney Ave.

I might attribute it to randomness, but I’ve noted the same thing at their job sites at 1506 Kinney and then later at 1906 Kinney. Either someone in Zilker really likes this builder and is ONLY knocking down their historic landmark commission meeting notice signs or the signs are being posted incorrectly/knocked down by… I dunno… maybe the builder. One sign, ok. Two signs, very suspect. Three signs, looks like a crime.

This is not acceptable, and I am going to report it to 311 + Historic Commission. I’m also getting a sitter so I can go testify at the historic commission hearing to protest, which is my right because I’m within 500 feet of this project.

Also, OMG HOW TACKY to cut down a 20-year-old tree someone planted in commemoration of a Zilker resident. YUCK. 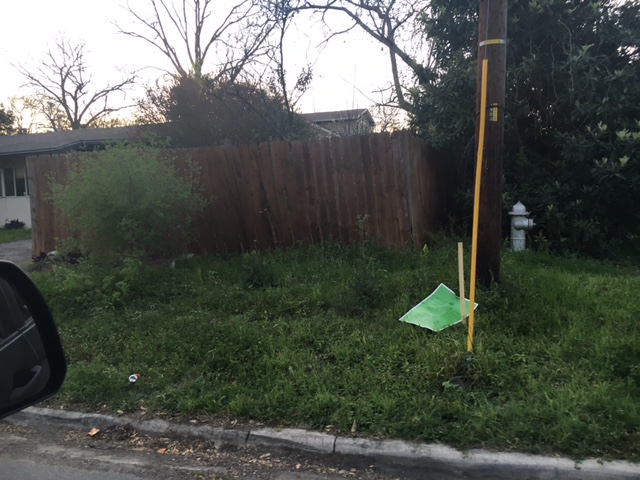 Either way. I strongly suspect someone is up to something.