I think that it might boil down to not wanting to see another big spending package that never gets finished, barely gets off the ground, or does not address specific needs. That is the way I feel about Austin at times. They only present giant plans that seem too broad to really accomplish anything in the end. They often never really finish what they start or bring any true solution. They seldom budget, plan, or perform maintaining projects correctly either.

I also think that some small projects to see if an idea can really work in the area of public transportation could pave the way to an area wide plan or additional projects to address specific needs. These giant “pie in the sky” ideas seem nearly impossible to pull off and cost a fortune to even put forward.

I think that it might boil down to not wanting to see another big spending package that never gets finished, barely gets off the ground, or does not address specific needs.

And I think it boils down to the same problem Austin has: affluent suburbanites who’d never use Nashville’s light rail system voted against it in large numbers. Unfortunately – and I’m glad this hasn’t proven to be the case with Austin – the Nashville vote likely had some substantial racial overtones to it. As was proven true decades ago when the D.C. Metro was built, “white folk” don’t like living a half-dozen stops away from “black folk,” hence the reason the Metro infamously skipped large portions of the city’s predominantly white areas, most notably Georgetown. (And btw don’t forget Tennessee is firmly entrenched in the Deep South.)

Side note: The lack of a Georgetown metro station is a particular problem for the 20K+ students and faculty at Georgetown University, considering Georgetown proper is priced on par with the West Village!

I also think that some small projects to see if an idea can really work in the area of public transportation could pave the way to an area wide plan or additional projects to address specific needs.

True. I’ve said for years, start with a transit line between UT and Downtown. Expand out from there. Get approval line by line. I get the idea of a grand plan. But you can have a grand plan and approve it in 10 year chunks

I wonder if it would be easier to get behind spending BILLIONS if there was some innovation involved to invest strategically. The existing proposals seem like investing in horse-based transport with the automobile on the horizon. I would like to see investing in tomorrow’s technology (self driving pods?) instead of yesterdays. Here’s something I could get excited about considering - http://www.skytran.com/

Regardless of technology dedicated rails never seem to go to waste

Self driving pods look promising - though investing in new tech has its risk. See the Monorail debacles. The one in Newark airport is down for repair quite often and is very slow. We are fortunate that our climate here is mild - so there are more possibilities. But generally speaking dedicated rail infrastructure will serve the city now and in the future n ways we may not be able to imagine.

See the Monorail debacles. The one in Newark airport is down for repair quite often and is very slow.

You rang? Yes, the debacles. I’m sure you’re an authority on monorail debacles. You and Jeff Kirk probably offer seminars on monorail debacles. Isn’t this where you laud buses and the 1.25% tax on every dollar we spend in this region to support them and a light rail system that serves nobody in South Austin? (oh, and the bloated bureaucracy that will defend this system forever.) I missed your critical comments on that or any of the other options discussed, like gondolas and light rail that costs way more, consumes a lot more real estate and conflicts with road systems. Criticizing monorail as very slow is ridiculous. It shows a very limited and willful misunderstanding.

The Newark system was built to last 25 years. Looks like it will make it. It’s a unique system built for a specific purpose by a company that probably only built one system. It has required repairs and maintence - Just far less than buses that constantly break down and need to be replaced. The advantages of monorail are many, but to me, the main thing is probably the ability to build it relatvely inexpensively in places that are already built out with minimal impact on existing roadways and traffic.

When you go looking for data on something, it’s more educational to do so objectively. There are many successful systems in operation and improvements are constantly being made as technology advances. If you go looking for examples to argue a point rather than to learn, you will find what you are looking for. Fortunately, NASA scientists don’t take your approach because nothing they’ve ever done would work.

I have a great book that sings the praises of a number of systems. I’d let you see it but I know you’re not really interested because it conflicts with your negativity:
https://www.amazon.com/Monorails-Future-Now-Arriving-Pedersen-2015-08-02/dp/B01K3JE2BU/ref=sr_1_1

Dedicated rail is so 20th century. There is a bit of a resurgence in monorails: 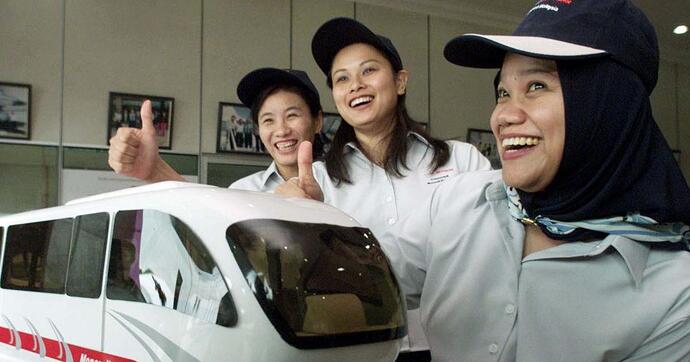 After many years headlining as a joke on The Simpsons, monorails are ready for their comeback.

Yes, the debacles. I’m sure you’re an authority on monorail debacles

Never claimed to be an authority. I am not.

The Newark system was built to last 25 years.