So this article has our discussion list cousins ( Yahoo Group & Nextdoor ) in an uproar that they might put a major league soccer stadium where the softball fields and Butler Shores park are currently along Toomey road.

I thought maybe we could have a bit more of a civil and open discussion about the possibility of a soccer stadium somewhere in the downtown area and possibly in our backyard.

Personally, the idea of biking my kids down to an MLS game from my house sounds amazing. Footprint and impact aside I love it.

To play devils advocate a bit, I do think the structure would have to be very efficient and honestly, I’d want some form of transit. Maybe this is where the gondolas come in connecting downtown with the MLS stadium / Zilker park across the lake.

Also, the motive of the team owner and the quality of owner seem somewhat suspect.

On the other hand anything that breaks the stronghold UT has on any major league sports teams coming to Austin seems… maybe worth it?

I’d love for Austin to get an MLS team! Been wanting that for a while. However, there are many other (and better) places to locate the stadium. Butler shores is too small and it would ruin the vibe there. Farther east is where I’d put it. But maybe up north also.

I too would love to see MLS come to Austin and was exited to hear about the plans for a D1(feeder) team being planned for COTA and a new soccer specific stadium (5000 seats) planned there. So an MLS team even closer to home seems even better for me as a fan. I will point out that a soccer stadium will be much smaller than UT stadium for those who have that 100,000 person structure in mind. Average attendance for the Columbus Crew was 15,000 per game so a 20,000 person capacity stadium is likely their target. I’m also skeptical there will be a proposal that fits this small space and the team owners seemingly large ambitions of a “downtown” stadium but time will tell.

Personally, I am not a fan of using this space for a stadium and parking lot. It’s bad enough when ACLfest takes over Toomey And Barton Springs. For this to happen throughout the year and likely include even more days for concerts or other events is unimaginable if you live nearby. The area can’t handle the traffic and would cement over protected land (recharge zone) of the BS aquifer. It seems to me like the best location would be expanding/modernizing the little used stadium at N Lamar and MLK.

The area can’t handle the traffic and would cement over protected land (recharge zone) of the BS aquifer.

Just FYI - this is the BS recharge zone - it is upstream (South) of Barton Springs - not downstream toward Toomey road. http://www.austintexas.gov/edims/document.cfm?id=114444

here we go with the gondolas.

Kidding aside, I welcome an MLS stadium in Butler. I will ride my kids down to a match with you brother. Maybe we can cut through Rod’s yard.

All my life I lived in Texas and my memories of going to any major sporting event always involved sitting in traffic both on the way in and on the way out.

The first time I went to a baseball game in NYC I was stunned by the ease with which people simply took the subway and walked into the park then left with little delay and were absorbed by the city.

One of the huge advantages of having a stadium downtown would be for people to walk to it. Add in any type of fixed transit system and I think you could have a real winner. The idea of putting a stadium outside of town is more environmentally impactful and just leads to re-enforcing the car culture.

I’ve said for years with rail - just build it where the density exists. A line from UT to downtown to start. Then expand out from there.

I think a stadium downtown would be amazing. I’m not 100% sold on Toomey as the right place, just because traffic flow there is pretty rough. OTOH, walking down to see a soccer game would be awesome.

Just for perspective, ACL is 75,000 people per day, the Austin Aztecs soccer team drew ~2,000 per event. I would be surprised to see this at too much over 10,000 per event. I’m not trying to dismiss the congestion concerns raised, just wanting to make sure we are converging on the scope of the issue to be considered. Personally I would like to see it a zero parking venue serviced exclusively (and adequately) by alternate transportation options wherever it is located.

Good clarification! And I love the idea of a zero parking venue.

I think it’s long past time for Austin to have its own professional sports team, and have no objections to “settling” for America’s least favorite pro sport.

That said, I seriously thought someone was kidding when I heard the Butler Shores site was under consideration. I’m trying to think of a worse location for a 20,000-capacity stadium, but I’m coming up short – and for numerous reasons:

Anyway, I think a soccer stadium is fine – but not there. I’m also kind of astounded that Kathie Tovo, normally a core member of the city council’s NIMBY brigade, is even considering an idea I assume will be categorically opposed by the ZNA (and possibly the BHNA, BCNA and OWANA as well). I don’t know if y’all know just how much parkland the city owns that’s currently sitting unused, but it totals thousands of acres. If a waterfront or downtown-adjacent location is a dealbreaker for the Crew’s ownership / management, I’d say “pass.”

Zero parking facility means they park in the hood and walk over. Just like during ACL.

Vehicular access to that particular parcel is abysmal – and arguably even worse, there’s no realistic way to improve it.

That’s actually not true - it makes a nice loop. Consider the following: 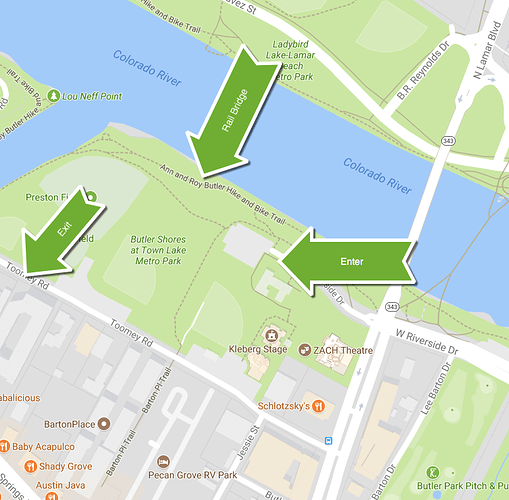 Even if we do end up with rail someday

This is the fundamental problem with thinking about rail. We can start with a “rail shuttle” simply connecting downtown to the stadium. This same shuttle could be used to get people to ACL or any other events at Auditorium Shores. You can then extend the “shuttle” over time.

the permanent placement of a structure grossly disproportionate in size

It would be large, but it could also be a multi-use facility. Honestly, I think it would be a great amenity.

It’d also be glaringly out of place along the hike-and-bike trail,

You could widen and improve the trail around the stadium - the feel would be awesome. Plus people could bike to the stadium from anywhere the trail went. Putting it right on the hike and bike trail actually makes it extremely pedestrian and bike friendly.

Instead, we’re looking at a Midwestern soccer team most Austinites have likely never even heard of

I think you are really underestimating the popularity of Soccer in Austin and surrounding areas. If 250k people turn out for F1 I bet you’d not have a big problem getting 10-20k out for MLS.

By the way I can’t help think of this April fools chronicle article from a few years ago: 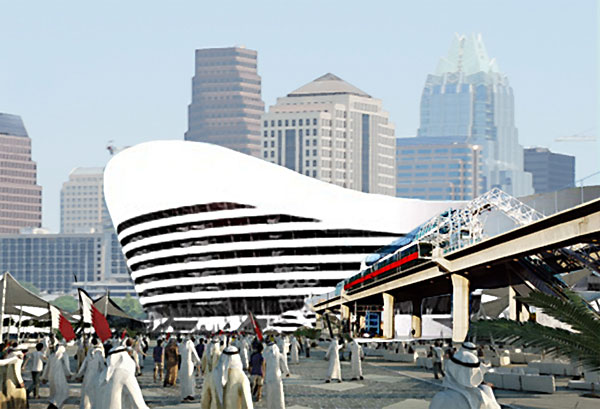 Will Austinites soon be taking 'da train' to a fantasy island?

Got curious about some other water front soccer stadiums: 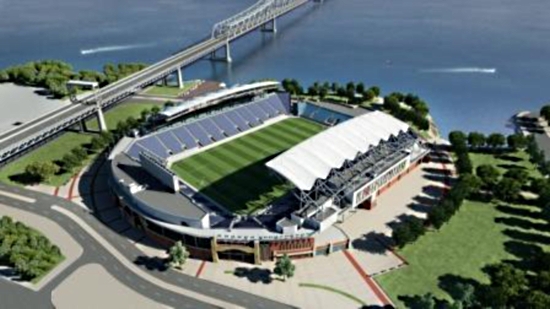 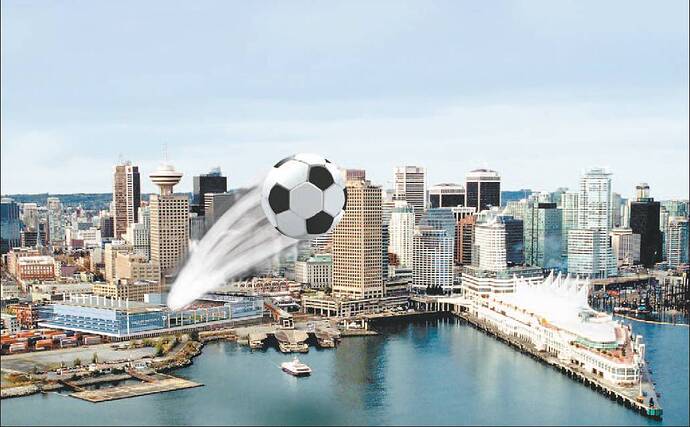 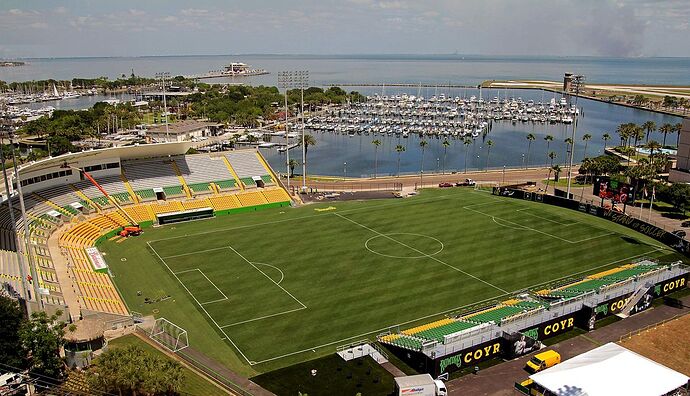 I don’t think the site makes sense for a stadium and I would like to see that greenspace should stay open to the public in some capacity. Our open urban parklands are a great asset to the area. I’d rather see a stadium go in near the new Statesman redevelopment. The Hooters and Threadgills lots will be redeveloped with mix use buildings which will include street level restaurants and retail. You have proximity to Auditorium Shores, the Long Center and Palmer, thus the makings of a good transit hub/destination.

I am also biased, as I have zero interest in watching soccer. Maybe I’ll change my opinion if this hypothetical new stadium includes plans for professional rugby. ha ha ha

thanks. this is the map i was looking at. http://www.hillcountryalliance.org/uploads/HCA/MapThenNowBSEA.pdf

That’s actually not true - it makes a nice loop.

The “loop” on Riverside is a tiny parking lot with maybe two dozen spots. Are you seriously suggesting it could be repurposed as an ingress point for 20,000 people?? There’s not even enough room in there to turn an average city bus around! And again, Toomey is only marginally wider than an average neighborhood road. Finally, the “rail bridge” doesn’t make any sense, given that people can’t exactly stop in the middle of Cesar Chavez to let passengers out.

It would be large, but it could also be a multi-use facility. Honestly, I think it would be a great amenity.

I agree - it’d be a great amenity! If located somewhere else.

This is the fundamental problem with thinking about rail. We can start with a “rail shuttle” simply connecting downtown to the stadium.

First, there’s nothing remotely “simple” about building a rail shuttle connecting downtown to the stadium. One of the biggest deterrents to constructing light rail in Austin has been the same since it was first proposed 20 years ago: there is no possible way to construct a means of traversing the lake that isn’t either ruinously expensive; a potential environmental hazard; or a potential risk to multiple wildlife habitats. Since the lake is classified as “waters of the United States,” as is the case for every navigable waterway in the country, the federal government would have to perform a years-long EIS prior to signing off on any project of this nature.

Second, the notion of building a rail line that would be used less than three weeks per year is flat-out asinine. If we’re gonna build any sort of “starter line” for light rail – an idea I actually support – it needs to be something with consistent traffic all day long: downtown is the most logical choice, given that it has traffic from about 7am to close to midnight on weekdays and 3am on weekends.

I think you are really underestimating the popularity of Soccer in Austin and surrounding areas. If 250k people turn out for F1 I bet you’d not have a big problem getting 10-20k out for MLS.

Even Houston – a city four times Austin’s size – hasn’t succeeded in “making ‘fetch’ happen.” So no, I really don’t think I’m underestimating the popularity (or more accurately the lack thereof) of pro soccer in Austin. Finally, the F1 comparison is a wholly false equivalency: it gets 250K people because it’s the only F1 race in the U.S., and a huge chunk of its attendees are out-of-towners. (Plus all major varieties of auto racing are more popular than MLS. Even college basketball is more popular than it!)

Well as I said you would have to tie some major infrastructure improvements to the project. Overall you’d also have to have a bit of vision to look beyond the why you can’t and into the yes you can. Maybe I’m just overly optimistic but I do think there are ways to make it be pretty awesome. I’m also not tied to the location. Fiesta gardens would be good too. But I like the idea of downtown, along the hike and bike trail, and ideally waterfront. Could be iconic.

In Denver and they hav multiple large venues tied by bike trail and I think its being successful to do it that way.

As far as location I keep wondering why not use the space where APA and the park next to it is off of Cesar Chavez. I realize it floods, but money can fix that. Downtown access would be better, the roads can handle the traffic, and I think it would get better use.