From this week’s Chronicle. (And “fanatic” is their word, not mine.) Oh, and speaking of CNCers “condescendingly inform[ing] Council that the city’s attorneys are wrong,” that’s exactly what our own Jeff Jack did recently when he recommended Council reject a ballot referendum over CodeNEXT. 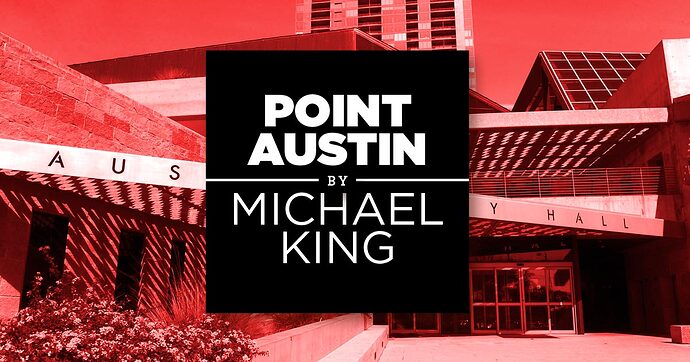 If you can't win the argument, blow up the process

When the anti-CodeNEXT campaigners target the architect for the “crime” of volunteering to serve on the Planning Commission.

The shameful analogy belonged specifically to Coun­cil Member Alison Alter, who, frustrated by the refusal of her colleagues to immediately start jettisoning Planning commissioners on the grounds that too many might have professional ties to “development,” accused them of failing their duty: “What would we do if a Planning commissioner was accused of being a sexual predator,” she demanded. “If they were arrested and out on bail?”

What a quandary. The City Charter forbids more than a third of the Planning com­mis­sioners to be “directly or indirectly connected to real estate and land development” although the phrase is undefined, and the city’s lawyers told Council even if it were clear, there’s currently no mechanism for enforcement. Over the objections of Alter and three colleagues (Ora Houston, Leslie Pool, and Kathie Tovo), a 6-4 majority adopted Ann Kitchen’s motion to direct city staff to provide some clarity and recommendations for action. Unsatisfied, the four dissenters posted another screed to the Council message board, insisting that “the community” had alerted Council to this simmering outrage – the greatest danger since a pool table appeared in River City – and commissioner heads should roll forthwith.

Just who is “the community”? The anti-CodeNEXT campaigners, of course – more precisely, a half-dozen folks aligned with “Community Not Commodity,” and determined to prevent any further progress on revising the land use code. Not content to win that argument on the merits – persuading Council to reject a new code, for example, or to postpone the work indefinitely – the CNCers are not only trying to de-commission some commissioners (architects, engineers, and an administrator for Habitat for Humanity), they attempted to persuade the district attorney or the county attorney to initiate criminal investigations of the volunteer commissioners.

When D.A. Margaret Moore and County Attorney David Escamilla stopped rolling their eyes, they suggested that the group was welcome to take their complaint to Texas Attorney General Ken Paxton. Now there’s an independent arbiter …

Pot Accuses Kettle
Last October, seven people signed the letter to Moore asking for a “quo warranto” process to be initiated against seven of 13 Planning commissioners, insisting that they are “biased,” “serve to benefit financially” from their service, and that their work “reflects the interests of the real estate industry” instead of the general public. The seven signers were Fred Lewis, Bill Bunch, Michael Hebert, Bill Aleshire, Roy Waley, Fred McGhee, and Mike Lavigne.

I count four lawyers, a Realtor(!), an anthropologist, and a political consultant in that list, each closely associated with Community Not Commodity – a group fanatically obsessed with preventing any revision of the land use code. As for “conflicts of interest,” a cursory search of property records reflects that most or all are homeowners, some owning properties appraised in excess of $500,000. They accuse the commissioners of “the potential to benefit financially from more development.” On that standard, shouldn’t these complainants be accused in turn of “the potential to benefit financially from less development,” as Austin’s artificially restricted housing supply continues to push their property values upward?

Last week, several of the letterwriters condescendingly informed Council that the city’s attorneys are wrong, that the City Charter language is transparent, and that Council should immediately remove at least three development-tainted commissioners, in order to reduce the vile stain of real estate interests.

Slander vs. Service
While they were berating Council, the 13 Planning commissioners – a hardly unanimous but dedicated group of citizen volunteers – were continuing the thankless grind of considering the latest draft of CodeNEXT, along with dozens of proposed amendments, in hopes of finalizing recommendations to Council. The CNC letter claims no challenge to “the integrity of the commissioners, who are fine Austin citizens.” Hogwash – there is a direct line from this shameless attempt at bogus criminalization to Alter’s “what if they were sexual predators?” Why should anyone agree to serve on a commission, and accept such an exhausting, overwhelming assignment, if their reward is to be slandered by people who want only to blow up the process?

Will CodeNEXT pass in some form? It’s too soon to tell, and if Council eventually decides that it isn’t soup yet, so be it. Have that argument in public, testify pro and con to your heart’s content, and do what you can to help improve in some small way Austin’s baroque and burdensome current land use policies. Targeting volunteer commissioners for diligently performing a job they’ve been appointed to do – at great expense in time and energy and for no remuneration – is utterly shameless. For council members to collaborate in that sabotage is a public disgrace.

Actually, less restrictions would most likely push the values far MORE upward than restrictions. Consider how lots on Rainey went from $160k to $millions. Or, if you’re renting or selling 2x or 4x the square footage in a hot location, you get that many more dollars. Yes, developers and architects and engineers are salivating over the prospect (since the Code requires the latter 2 be involved in practically every project). It’s a racket.

And, of course your taxes will skyrocket commensurately w/ the new multiple of value (whether or not you develop). You may have noticed the relatively minuscule rise this year based almost entirely on land values.

I’m okay with it either way. If suddenly everyone’s developing our neighborhood into a crap-hole of towers, I’ll do same, make bank and move the F out before it turns into slum. If some green remains, I might stay coupla more years. The Springs will be trashed before then anyway.

Code needs a rewrite to be sure. CodeNext is a disaster, longer, more complex, gives more deference to the DAC (really bad idea), applied uneven zoning to what was previously consistent… but maybe draft 20 will be better…