There are things worse than parking meters
The group of volunteer park-lovers who make up the Parks Board passed a resolution yesterday urging the city not to install parking meters near parks unless there they are served by decent public transit. The resolution was in response to plans by the city to install metered parking at Deep Eddy.

In some cases, in recognition of the city’s current car dependence, offering free parking may be the only fair thing for the city to do. But in some cases there is a cheaper and far more equitable solution: let them park on the freaking street.

Unfortunately, many of the streets near the city’s most attractive amenities are off-limits to visitors due to the city’s Residential Permit Parking Program (RPPP). Under RPPP, if enough residents of a street sign a petition, the city will install signs barring non-residents from parking there during certain hours (usually the highest-demand hours). In other words, we’re taking a public good (the road) and saying that it can only be used by a certain subset of the population.

The map below shows streets that are subject to RPPP. A number of streets near Deep Eddy (see the black circle) are off-limits to swimmers. You can check out the map and zoom in here. 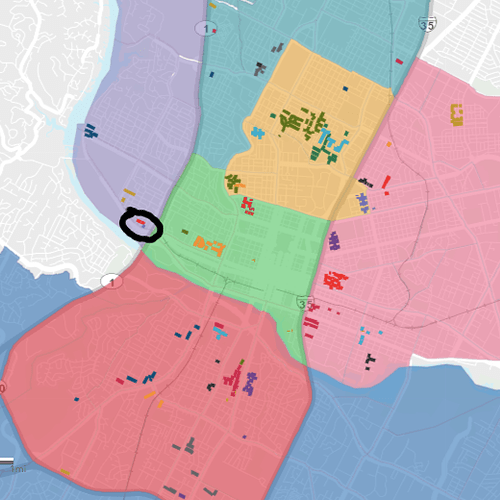 By the way, city parking meters made the city $17 million last year. This isn’t the time when we should be forfeiting revenue sources.

The only good use-case for RPPP is for areas where street parking is the only option for a resident. If your argument for restricted parking is I don’t like cars on a street I did not own nor did I pay for it’s a really spurious argument.